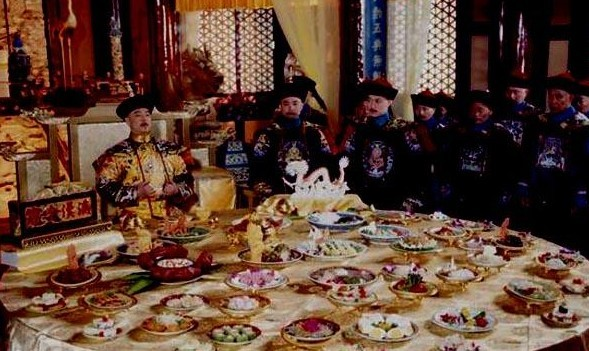 During the Qing Dynasty (1644-1911) there were all kinds of palace banquets. Grand banquets were held for a number of reasons; when a new emperor came into power, when the government changed its title of reign, when a war was won, for the Spring Festival, or for special birthdays.

Fish, deer and pork were very important food in the Mancu’s daily life. The method they used for cooking was usually either toasting or boiling. After their occupation of the former Han areas and in order to strengthen their control of the Han people, they made a large number of former Han officials, landlords and scholars, their officials. In order to satisfy both the Han and the Mancu, banquets during the Qing Dynasty were divided into two forms-the Han banquet and the Mancu banquet. Different cooking utensils, dinner sets, materials, and cooking methods were used in preparation of the banquets.

In the middle period of the Qing Dynasty, the folk customs and cultures of the Mancu and Han became gradually blended, which promoted the development of a Qing Dynasty palace food culture where the two styles became mixed. During the period of Emperor Kangxi and Qianlong, when society and politics were stable and the economy was flourishing, luxurious customs became popular.

It is said that when Emperor Kangxi first tasted the full Mancu-Han banquet, and wrote down its four characters, the banquet became famous in the palace, and became popular with nobles and rich businessmen. The materials used to cook the food were varied, and a characteristic of the food was that it looked very beautiful and tasted delicious, the only disadvantage was that the price was very high. As time went on, Mongolian, Hui and Tibetan foods were added in this banquet, so the Mancu-Han Banquet became a five- nation banquet, later known as the combined banquet. The exquisite appearance of the food had never been seen before and it became the most colorful and luxurious banquet in Chinese history.

Following the development of cooking methods, courses in the Mancu-Han banquet have undergone considerable change, its contents have became richer, its appearance has further improved, and today there are more 200 kinds of courses, including varied materials from the mountains and sea. Indeed this banquet has become a symbol of traditional Chinese culture. 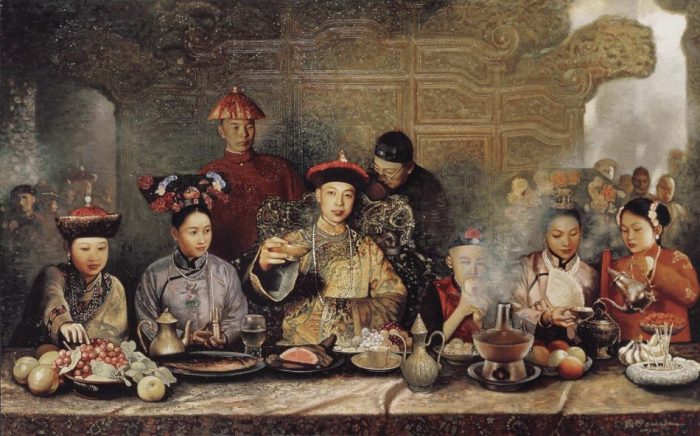 Due to the fact that its courses are very rich, it is impossible to eat all courses at the same sitting, therefore such a banquet is usually eaten at several sittings. It can be eaten for lunch, dinner and supper or some people eat it over a two day period, others over a three day period. In order to fully appreciate such a splendid banquet, some Japanese guests relax and enjoy the food by six meals.

Where can this banquet be found? Go to Beijing Fangshan Restaurant in Beihai Park. The restaurant is located in a group of ancient buildings in the park. The restaurant was established in 1925 and has a history of more than 70 years, (its predecessor was the imperial kitchen of the Qing Dynasty). Since its opening, it has developed the original courses of palace food and now has more than 800 kinds of courses and desserts. The restaurant has received praise from both domestic and overseas customers.

The furniture and decorations are all in the traditional imperial style. Waitresses are dressed as Qing Dynasty maids and serve customers according to the customs of the Qing Palace. Customers will feel like they have steeped back in time by several hundred years, right into a splendid palace banquet.