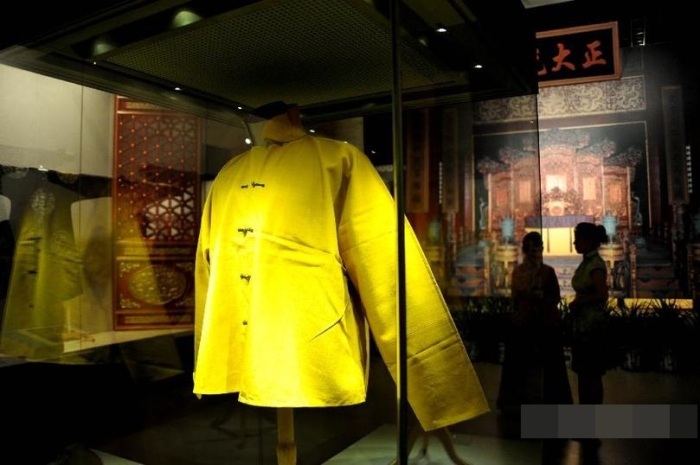 The imperial yellow jacket (Chinese: 黃马褂; ; Pinyin: Huang ma gua) was a symbol of high honour during China’s Qing Dynasty. As yellow was a forbidden color, representing the Emperor, the jacket was given only to high-ranking officials and to the Emperor’s body guards.

A ma gua (马褂, literally “riding jacket”) is a short-sleeved, loose outer garment of Manchu origin, designed for ease to put on and take off by wearers on horseback.

Although persons not of imperial blood were generally prohibited from wearing yellow-coloured clothing, during the Qing Dynasty the yellow riding jackets would be worn by the Imperial body guards, albeit as a livery coat, and then only while escorting the Emperor.

The yellow jacket could also be granted by the Emperor (or later Empress Dowager Cixi) to individuals for civil or military merit, especially after 1842 when China was more or less in a constant state of war. Since yellow clothing were normally reserved for the Imperial family, the yellow jacket came to be regarded as the highest honour of the Qing Dynasty.

Towards the end of the Qing Dynasty the prestige of the yellow jacket had declined somewhat; in one infamous case, a yellow jacket was granted to a train driver for his service to Empress Dowager Cixi.